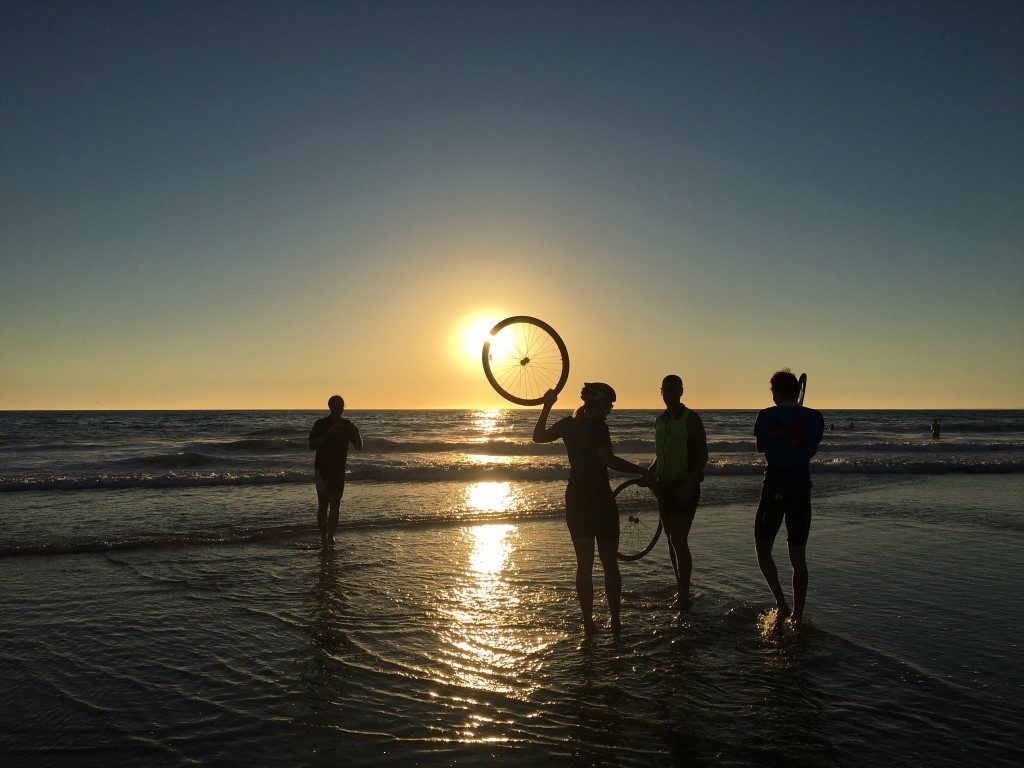 On September 6, 2016, a group of 4 people left from Portsmouth, NH, and rode across America in support of then presidential candidate Hillary Clinton. Their ride ended on November 14th at the Santa Monica Pier, just a block away from the Santa Monica Bike Center. With an election season that was a roller coaster of emotion in and of itself, we thought it would be interesting to ask the group a few questions about how the idea came about, how they campaigned while on the road, and how the election results resonate with them now that the race for the White House is over.

The core group of cyclists included Ben Feldman, James Daudon, Mike Bienkowski, and Meredith Bird. Interestingly, the team was a West and East coast collaboration, with Ben and James being from Oakland and Seattle, respectively, while Mike and Meredith both call the Boston area home. The group’s experience levels varied; Ben admitted, “I had no prior experience bike touring. I did a little bit of mountain biking in college. I knew how to change a flat tire, but that was the extent of my bike maintenance knowledge before this trip.” Meredith and James had similar amounts of cycling experience prior to the ride, and the three knew each other as fellow alumni of Colorado College. Mike was the most experienced rider of the group, having led bike tours for high school students for the past several summers with a company called Overland, based out of Williamstown, MA. Meredith met Mike through Overland, and the group coalesced from there.

I hear you guys left during some bad weather, which is ironic given the tempestuous state of this election. What were the goals going into the ride and how did the idea come about?

“Many of us on the trip may have had different personal goals for beginning the trip, but Riding Hills for Hillary was originally designed as an effort to get millennials excited to vote for Hillary by supporting the campaign in a unique and fun way. Many of us were excited about working for the campaign and going on a very long, physically challenging adventure but Meredith Bird was the one who had the brilliance to combine these two ideas and envision a bicycle powered campaign. Election season seemed like a really interesting time to see a cross-section of the country and we are also very excited about collecting peoples’ stories along the way and sharing them with our followers on the coasts. Although this was not the primary goal of our trip initially, in the aftermath of this election, which is still a complete shock to most liberals along the coast, making contact with people with different political persuasions seems to be the more important goal of our trip.”

After riding through red states, blue states, and swing states, what kind of reaction did you get from the public and did it vary based on where you were?

“Throughout this trip, everyone we spoke to was extremely kind to us. Even the Trump supporters we spoke with were very impressed by our undertaking and congratulated us for our efforts.”

How did you choose the route?

“We planned our route to bike through as many swing states as possible.” 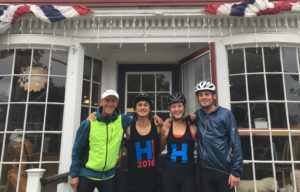 “I can’t speak for everybody on this trip but my favorite part was biking through Monument Valley in Navajo Nation. In particular, one stretch of the road between Bluff and Mexican Hat (a region of Utah) where we dropped about 2,000 feet over 15 miles. The sight lines of the red mesas, bluffs, and towers were incredible. I had to dip out for some family business during the Iowa section of the trip. From what the others said, Iowa was the most difficult leg of the journey by far. Lots of rolling hills and very crummy dirt roads. Meredith hit a gravel patch while riding down a steep hill on the way to Nebraska and had to get 19 stitches in her thigh.”

It seems like riding was only part of your mission. Tell us about the work you did off the bike.

“During our rest days, we would connect with the local campaign office, to volunteer, like the coordinated campaign, Hillary for America. Depending on the time during election season and local state laws prohibiting certain political activities, what we did at each site varied. Primarily, our time was spent registering voters and canvassing around the area.”

This election highlighted the massive divide between the different political ideologies in America. You rode across the whole country and saw many different cities, communities, and people. What were the issues/policies that you were focused on going into the trip? Did any others become more apparent or important after your experience?

“The cities we passed through in Middle America seem to be going through a revitalization right now, with new technology industries, lots of development, and young people moving to the area. Conversely, many of the small towns we biked through had many vacant store fronts and fewer employment opportunities. These small towns are not benefiting from the social welfare programs that have helped many poor urban-dwellers, nor are they benefiting from the tech boom that’s taken place in urban areas. As you might imagine, these rural towns were where we saw the most ‘Make America Great Again’ yard signs. Moving forward, an important issue for policymakers should be how to support people living in communities that have been forgotten in the midst of rapid urbanization. And an issue for us all to address is the need to bridge the information gap between urban and rural areas.”

Did you see anyone out there riding for Trump?

“As far as we know, nobody ever undertook a bicycling campaign effort for Trump. However, there is a motorcycle gang called ‘Bikers for Trump 2016’ that was organizing rallies during the election. A man on a Harley Davidson wearing a ‘Bikers for Trump’ t-shirt passed us on the side of the road in Pennsylvania, but did not stop to chat with us.”

Any word from Hilary? Did she offer to join the ride at any time?

“We did not hear from Hillary. I understand that she was pretty busy, but I’d like to think that if she had some more spare time she would have joined us for the ride.”

Where were you on election night? What are your reflections on the ride given the outcome of the election?

“We were in Las Vegas on Election Night. Many of us are still processing what this all means, but the results certainly revealed the information and ideological gap between rural and urban parts of the country. “I suppose that it feels like there is a greater urgency to work for social justice and environmental causes, but these causes have always been worth fighting for. I certainly took Obama for granted during his 8 years as President and perhaps, I also got a little bit comfortable under his administration.”

Although we didn’t all ride across the country, this past election and the months leading up to it did feel like a long arduous bike ride…the outcome perhaps like a flat tire at the top of a giant hill… Looking forward, how does your experience impact your outlook and how will you continue to spread your message?

“Great questions. Many of us bikers, and millennials, are currently doing a lot of introspection. It feels like this country’s movement in the direction of social progress has reversed and many of us are now questioning our place in history. I am now considering moving to a place with a little more political diversity.”

“Depends who is running for president! Election season is a fascinating time to bike across the country, I would highly recommend it.”

For more info about Riding Hills for Hillary check out their Website here.

Measure M — How Could Your Vote Help Change The Future of Los Angeles? Previous Article The Progress and Future of Santa Monica’s BAP Next Article